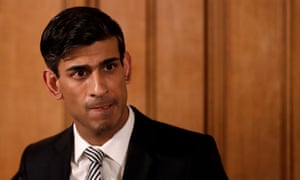 Rishi Sunak said an unprecedented level of state protection will be offered to support businesses and workers through the coming months to prevent the coronavirus outbreak bringing the economy to its knees.

The chancellor’s second package of measures since he announced a £30bn rescue operation at the budget earlier this month, has been developed in recent days in response to criticism that previous efforts would fail to prevent thousands of companies going bust.

Earlier this week he announced state-backed loans of at least £330bn of tax breaks and other measures worth £20bn to protect companies and households suffering amid the economic collapse triggered by the virus.

A fresh scheme will go further and offer greater protection, he said.

The Coronavirus job retention scheme will offer all employers – private companies, not-for profit organisations and charities – access to a grant covering up to 80% of the average wage, worth up to £2,500 a month.

The grant will be backdated to 1 March and available from next month. It will be open initially for three months.

The chancellor said it matched the promises made by some other European countries – Sweden, Norway, Denmark, Portugal and Austria among them – and would allow companies who have sent staff home to continue paying them with government cash.

The Treasury expects the move will prevent thousands and possibly millions of jobs being made redundant in the coming weeks. The US has already seen a large increase in jobless claims as companies lay off workers. There are predictions that next week millions of workers could be added to the US claimant count.

Not all measures were given a pricetag, but business groups and trade unions agreed that it was biggest subsidy of economic activity undertaken by the British government.

… we’re asking readers like you to make a contribution in support of our open, independent journalism. In these extraordinary times, when anxiety and uncertainty abound, the Guardian’s measured, authoritative reporting has never been so vital. As 2020 ensues, we will remain with you, delivering quality journalism so we can all make critical decisions about our lives, health and security – based on fact, not fiction.

You’ve read 265 articles in the last four months. We believe every one of us deserves equal access to accurate news and calm explanation. So, unlike many others, we made a different choice: to keep Guardian journalism open for all, regardless of where they live or what they can afford to pay. This would not be possible without the generosity of readers, who now support our work from 180 countries around the world.

We have upheld our editorial independence in the face of the disintegration of traditional media – with social platforms giving rise to misinformation, the seemingly unstoppable rise of big tech and independent voices being squashed by commercial ownership. The Guardian’s independence means we can set our own agenda and voice our own opinions. Our journalism is free from commercial and political bias – never influenced by billionaire owners or shareholders. This makes us different. It means we can challenge the powerful without fear and give a voice to those less heard.

Your financial support has meant we can keep investigating, disentangling and interrogating. It has protected our independence, which has never been so critical. We are so grateful.

We need your support so we can keep delivering quality journalism that’s open and independent. And that is here for the long term. Every reader contribution, however big or small, is so valuable.