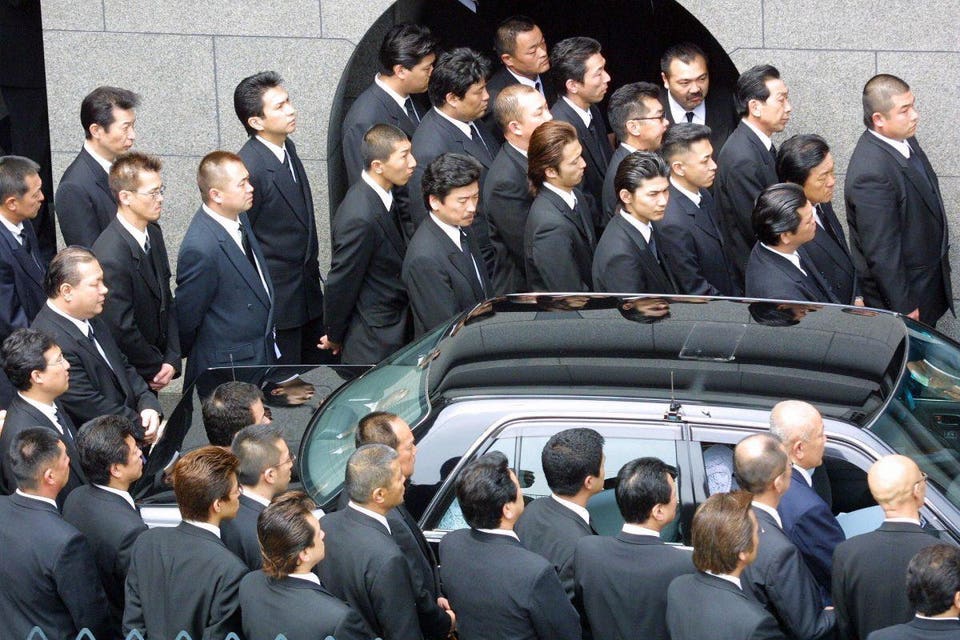 Members of Japan’s largest organized crime syndicate, the Yamaguchi-gumi, gather at a funeral for their boss in Kobe, Japan, on April 20, 2002.

In 1999, The Sopranos wowed Americans with all the subtlety of a daylight mafia hit. Its look at the last gasps of the nation’s fabled organized crime gangs slayed viewers, while capturing the economic zeitgeist like few television shows ever had before.

Japan will soon be swept by a similar look at its own fabled gangsters, the yakuza. It comes courtesy of WarnerMedia, which is filming a 10-episode take on the best-selling memoir Tokyo Vice. Published in 2010, it’s a raw and heartfelt tale of the intrigue and danger experienced by the first American journalist admitted to the insular Tokyo Metropolitan Police Press Club.

That was in 1993, just as deflationary forces wreaked havoc with what was then Asia’s biggest economy. Hollywood’s arrival in Tokyo is, of course, its own Sopranos-like moment. Just as HBO’s now-classic show aired at the nadir of the mafia’s influence in New York, Tokyo Vice comes just as Japan’s goodfellas are on the run–in ways that tell a clear economic tale.

In 2018, the number of Japanese gangsters fell to an all-time low of 30,500, according to recent figures from Japan’s National Police Agency. That’s a far cry from the roughly 183,000 gang members earning a living back in the mid-1960s.

Their ranks remained plentiful into the 1980s, when the bubble economy created a bull market in shakedown opportunities and law enforcement largely looked the other way. Even after things imploded, the 1990s offered ample scams–from giant construction projects to loansharking to dabbling in distressed debt to pump-and-dump schemes in the stock market.

As the 1990s gave way to the 2000s, media reports depicted mobsters taking the Series 7 exam, signaling a bigger move into white-collar crime (which also was a subplot in The Sopranos). Think “Goldman Sachs with Guns.” The $1.7 billion Olympus accounting scandal of 2011 had local journalists running down tips of rumored yakuza ties (Olympus denies it).

But the last eight years have rough on Japan’s wise guys. In 2011, a nationwide crime syndicate ordinance went into effect. It didn’t just criminalize transacting with syndicates. It also demanded that banks, real estate agencies, health-insurance providers and driver license bureaus turn gang members away. The same for nursery schools and even sports gyms. To this day, many of the latter have no-tattoo policies, something for which Japanese gang members are known. 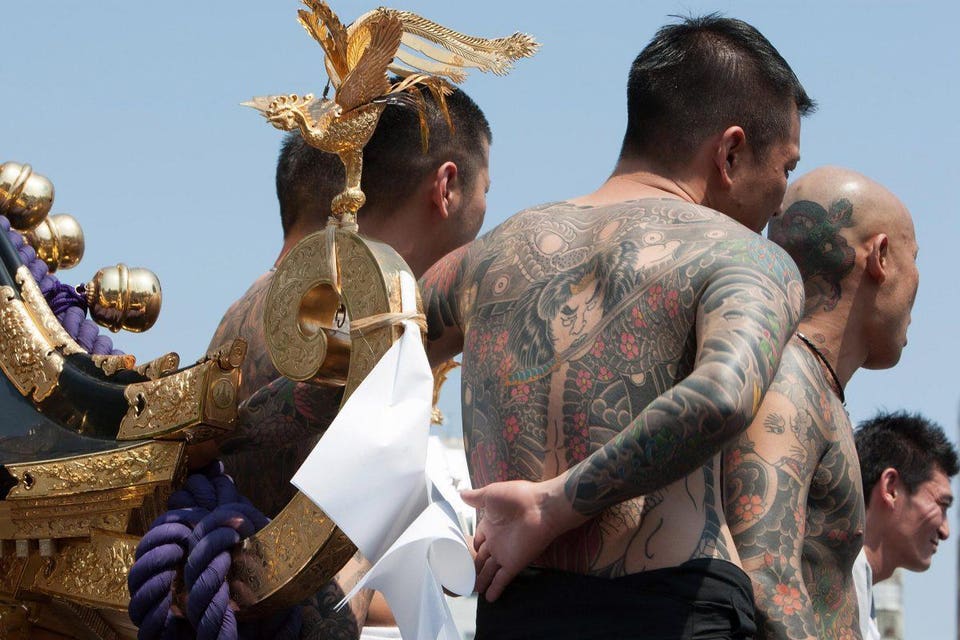 Members of the Japanese Yakuza Takahashi-gumi crime syndicate wait with their mikoshi portable shrine before carrying it through the streets, as part of the second day of the Sanja festival on May 19, 2012, in Tokyo, Japan. Many of the spectators of the Sanja festival come specifically to see the portable shrine being carried by the almost naked, and heavily tattooed, yakuza crime syndicate members.

But 20 years of deflation, or even just disinflation, are also taking their toll. In an odd bit of serendipity, The Sopranos went on air the same year the Bank of Japan first slashed interest rates to zero. Since 2013, the BOJ has engaged in history’s most audacious quantitative easing experiment to get inflation to 2%. Six years on, it’s barely hit 1% annually.

With less top-line growth and less “gray economy” business to go around, the number of organized crime members has dropped roughly 10% each year since 2011. What’s more, the National Police Agency says membership is now down for 14 consecutive years. Not only are the yakuza running out of places to hide, but places to earn enough to pay the fees they must kick up to the boss (several thousands of dollars each month).

That’s despite construction ahead of the Tokyo 2020 Olympics, which to the layperson would seem a shakedown bonanza. Japan’s government, meantime, is getting on the casino train. Las Vegas moguls are beginning to build giant integrated resorts, creating a market likely worth $15 billion by 2025, according to Morgan Stanley. Still, the ranks of Japan’s gangsters dwindles, thanks partly to lethargic economic conditions.

What’s not dwindling, though, is Hollywood’s fascination with Japan’s colorful Mafiosi. The lure of their missing pinkies, full-body tattoos, obliging groupies and bushido code brought Robert Mitchum to Japan to star in 1974’s The Yakuza. Directors from Ridley Scott to Quentin Tarantino have long romanticized the Japanese mobster. For years now, Martin Scorsese has been sniffing around for a yakuza story to film, including for a time, Robert Whiting’s 1999 tome Tokyo Underworld.

On the small screen, the lead in Tokyo Vice will be Ansel Elgort, star of Baby Driver and Steven Spielberg’s remake of West Side Story. And like The Sopranos, the timing of this production is oddly fitting. Even as it wows households everywhere, it will serve as a cultural bookend.

Unofficially, it will dramatize the twilight of a previously pervasive socioeconomic force in a nation of 126 million people. On the surface, things don’t change very fast in Japan. Below it, where the underworld operated, power dynamics are shifting with bewildering speed. Who knew the yakuza might become an economic indicator?